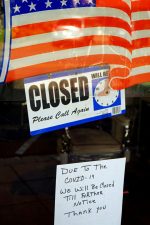 The reverberating effects of COVID-19 caused the S&P 500 to fall 34% in just over a month – the fastest bear market in history.  Since March 23rd, despite a historically large decline in economic growth, the S&P 500 has surged more than 35% and credit spreads have tightened. On the surface, it’s difficult to take in the scope of economic destruction we have witnessed over the last 90 days and balance that with a rallying stock market. However, when you look past the horrible employment data and the steady stream of defaults and bankruptcies (as challenging as that may be!), you can start to build the case for long-term investments in risk assets and the belief that the economy will eventually strengthen. In other words, where there’s a will there’s a way.

During the 2008-2009 financial crisis and now during the Covid crisis, the government via the Federal Reserve (Fed) and Treasury have shown the willingness to brace and stimulate the economy by pumping trillions of dollars into the system. To be a confident investor in today’s environment means putting your faith in these Federal policies.

Quick Recap of the Federal Reserve

The Federal Reserve was created in 1913 to centralize the control and activity of the banking system hence why it is known as a “central bank.” The Fed acquired two important powers as the system developed: first, the funds that banks are required to hold in reserve against customer deposits (reserve requirements) could be used to control the growth of banks; and second, decisions made by business leaders—and the business cycle itself— could be affected by the centralized control of the banking system ie. controlling interest rates (the cost of money). Over the years, the Federal Reserve also took on the role being the “lender of last resort”. During periods of economic stress, the Fed will offer loans to banks or other eligible institutions that do not have any other means of borrowing, and whose failure to obtain credit would dramatically affect the economy.

The Fed exercised their traditional tools and much more in order to stabilize and stimulate the economy in the face of the Covid crisis.

The gravity of COVID-19 began to rear its ugly head in early March – global equity markets plunged, lending to businesses and consumers froze up as credit spreads widened sharply and the typically smooth mechanics of the financial system were thrown into jeopardy. The Fed’s first action was to cut its benchmark interest rate to zero on March 15th and followed that up by launching and reopening several lending facilities to provide billions of dollars directly to distressed companies, investment companies, banks and money market funds.

These actions, coupled with unprecedented fiscal stimulus from the Treasury department, most notably the direct payments to households, expanded unemployment benefits and “payroll protection loans”, have helped to stabilize the financial markets. In May, the Fed further expanded lending programs to municipalities and even initiated the purchase of corporate bond ETFs.

To put the magnitude of this stimulus into perspective, the chart below shows the size of the Fed’s balance sheet (money created) over the last 10 years:

The balance sheet had hovered around $4 trillion since 2014, but recent action from the Fed has expanded the balance sheet to over 7 trillion! The amount of stimulus provided in the last two months already eclipses the total value of securities bought in each of the three QE programs enacted to pull the country out of the financial crisis 10 years ago.

To further pacify investors and businesses, the Fed has made it very clear that they are prepared to use whatever means necessary to loosen credit conditions and reignite the economy during the slowdown.

There is historically a positive relationship that exists between the Fed balance sheet and stock market returns.

The chart below goes back to 2003 and groups the four-week percentage changes in the Fed’s balance sheet into various degrees of change, with declines on the left moving towards increases on the right. The blue bars indicate the return of the S&P 500 over the 4-week period following the Fed’s actions. 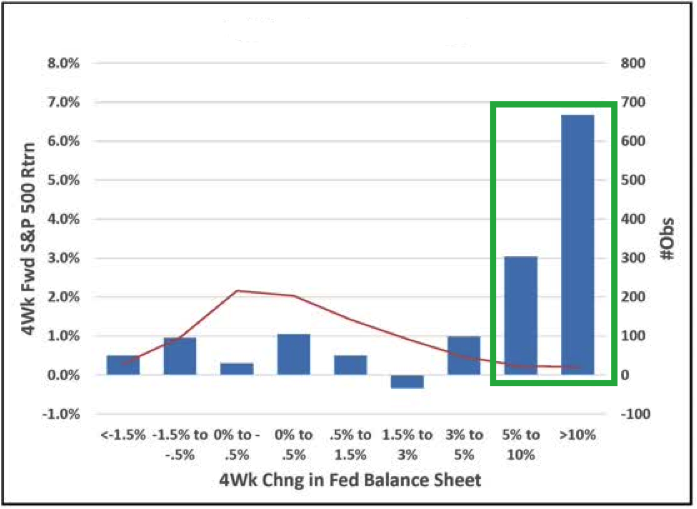 As you can see by the periods highlighted in the green box there is a noticeable relationship between accelerating stimulus and outsized stock-market returns.

All told, the S&P 500 is only down 5% year-to-date while the tech-heavy NASDAQ is up over 8%. Using the expansion of the Fed balance sheet as a guide, it’s reasonable to expect strong equity returns to endure until there is a slowdown in monetary stimulus.

The Fed took an extraordinary step in April when they announced a program to purchase corporate bonds and corporate bond ETFs. This came after a dreadful March, where the sector experienced record outflows from mutual funds/ETFs and corporate bond spreads increased from 1.3% to over 4%. The chart below captures this move in spreads:

Corporate bond spreads widen during periods of economic uncertainty and the credit freeze in March offered an ominous signal to financial markets. After the initial Fed lending facilities opened in March and direct intervention in the corporate bond market began in May, spreads have tightened back below 2%. The market recognizes pockets of weakness in corporate credit as several industries will remain under pressure for the foreseeable future. That being said, we can comfortably say that in the absence of Fed support, the corporate bond market would be feeling even more heat right now.

To be clear, government stimulus is only one leg of the stool aiding the market rebound; and while stimulative in the short and medium term the Fed will have to eventually figure out how to deal with the long-term side-effects of higher debt levels.   We do not believe that this is a market without risk – there is plenty of uncertainty on the horizon. However, the powerful effects of Fed intervention must not be ignored when looking at absolute returns and prices of risky assets.

It can be incredibly difficult to make sense of investment markets surging higher when so much economic pain is still unfolding all around us.  But markets like to look-forward into the future and tend to choose their direction based on whether things will be better or worse in the months ahead.  Right now, the market’s behavior is suggesting that the massive intervention by the Fed and Treasury since March will successfully bridge the economy to more normal, healthier times.  One of our main responsibilities as advisors is to give you the confidence to trust what the market is signaling even when it might feel painful to do so.