The S&P 500 reached a closing high of 2930.75 on September 20, 2018. Since then, significant market volatility emerged, and the S&P 500 has fallen almost 10% in just over a month. As with many abrupt market drops, investors and pundits fear this is the start of a bear market. However, we believe current market conditions are more indicative of a rolling bear market, an important distinction.

To clarify, a bear market is typically defined as a broad index (like the S&P 500) falling by 20% from a previous high. When a bear market occurs, all sectors of the market are typically affected. No matter where you were invested, you suffered significant losses. In contrast, a rolling bear market refers to a market scenario that includes falling prices of securities, but different market sectors don’t get hit all at once. Rather, the market pullback permeates through different sectors, hitting one or two at a time, resulting in sell offs and bear markets on an individual sector and company basis.

Current overall market conditions, while not in a bear market, are beginning to resemble a rolling bear market as several sectors blasted south, dropping by over 10% in the last month alone. Among those sectors are materials, industrials, energy and consumer discretionary. Conversely, defensive sectors like utilities and consumer staples generated positive returns during this selloff.

With the idea of a rolling bear market in mind, this chart shows how far each sector of the S&P 500 are from their 52 week highs as well as their performance thus far in October 2018: 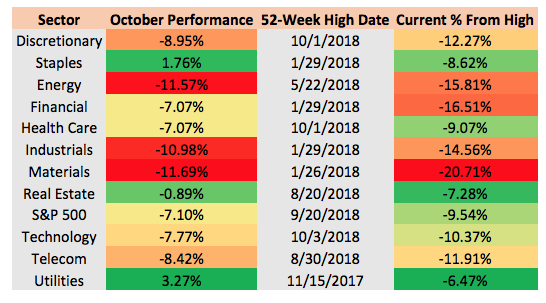 As you can see, materials are now in bear market, but the defensive sectors have held up on a relative basis. The S&P 500 is down 7.1% in October. Clearly, there is dispersion in the movement of these sectors and how far each have fallen in the recent market swoon.

Let’s take a closer look at a few of the sectors that are on either end of the spectrum to provide further insights into underlying market conditions.

Materials are the biggest loser in October with returns of -11.69%. After a strong 2017, aided by the positive effects of increased infrastructure spending, fears over an impending trade war with China created significant uncertainty in the sector in 2018. China is one of the largest purchasers of materials from US companies and has been since the beginning of their economic expansion.

The utilities sector is the leading performer in October, up 3.27%. Utilities are often seen as the most defensive sectors due to their insulated business models and attractive dividend yields. When economic prospects decline, or market uncertainty appears, investors seek safety in high dividend paying stocks like utilities. Currently, this phenomenon pushed utilities into overbought territory, even as the broad market indices plunged.

The only other positive performer in October is consumer staples, up 1.76%. Lofty growth expectations across the marketplace simmered, and this traditionally defensive sector was another beneficiary. In addition, strong earnings from leaders like Procter and Gamble contributed positively to performance. Finally, increased M&A activity has also supported the market and provided economies of scale, as larger players like Conagra and Kraft Heinz continue to make moves.

For more perspective on the recent market shift, the below charts show performance for each sector from the beginning of the year through September 20 (the market high) and through the close on October 25th: 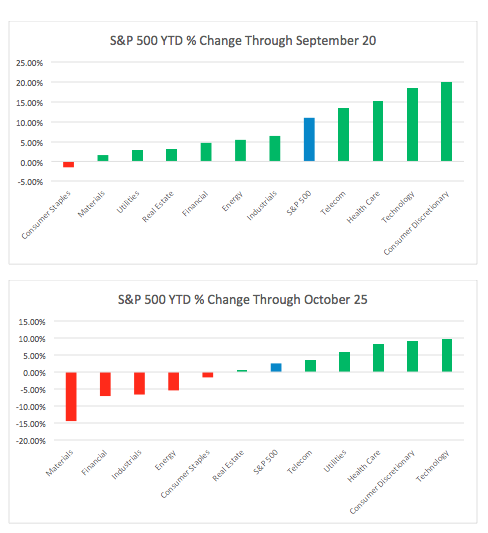 We can provide further context to these shifts by referring to the 3 sectors mentioned above:

With the potential of a rolling bear market as described above, the benefits of diversification continue to be on display as investors heavily concentrated in recently lagging sectors have felt a bit more of this pullback. It will be interesting to see if these trends continue to play out as volatility spreads across different markets.

Disclosure: Nothing on this site should ever be considered to be advice, research or an invitation to buy or sell any securities.  Full disclaimer.